Mohammed is known by his biography, the Sira, and his traditions, the Hadith. There is no mention of him in the historical records of his day. He is mentioned by his name only four times in the Koran. Instead, he is frequently referred to by the titles “Messenger” and “Prophet". In the Koran, Allah says that he is the “seal of the prophets” which in Islamic doctrine is interpreted to mean he is the last of the prophets to be sent to humanity.

Mohammed was an orphan who became a successful businessman. In his forties he reported that he had visions and heard the voice of the angel Gabriel speaking to him the words of the only god of the universe, Allah. These words, recorded from memory and written down, formed the Koran.

The Koran says in 89 verses that Mohammed is the perfect man and that his life is the pattern or divine human prototype for all humanity to follow.

Mohammed preached the religion of Islam for 13 years in Mecca and converted 150 Arabs to Islam. He was a divisive man and the Meccans drove him out of town. He and his followers immigrated to Medina and he became a politician and jihadist. During the last 9 years of his life, Mohammed averaged a jihad event every 6 weeks. When he died in 632 CE, every Arab had converted to Islam due to jihad. 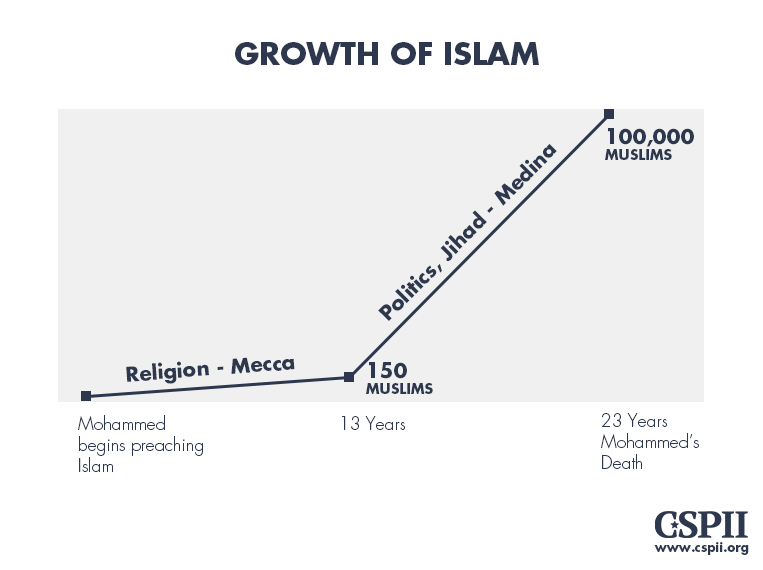 Mohammed was the most successful warrior in history. All other military leaders’ influence stopped after their death, but Mohammed has inspired war for 1400 years and it continues today.