The definition of jihad is “struggle”, not holy war. Jihad is so important that it is included in every Islamic text – the Koran, the Sira (biography of Mohammed) and Hadith (the Traditions of Mohammed). Jihad is 24% of the later Koran, 21% of the Hadith (Bukhari) and 67% of the Sira. 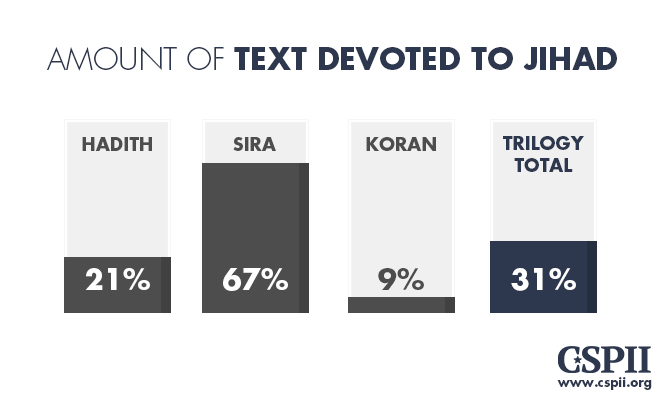 There are four ways that jihad is practiced. Jihad can be by the sword, with writing, with speech and with money.

Mohammed was not very successful in spreading Islam until he became a jihadist. When he died every Arab was a Muslim. It was jihad that brought Mohammed to power.

According to the Islamic doctrine, jihad is the best action that a Muslim can perform. If a jihadist dies in his efforts, he does not suffer the punishment of the grave or the uncertainty of judgment day, but goes directly to paradise. He will dwell among the heavenly virgins of pleasure.

Jihad totally changed history and created a new political landscape. The Middle East, Turkey, Egypt and North Africa were transformed from a Christian civilization to a Islamic civilization. For seven centuries Spain and Portugal were under Islamic rule. Eastern Europe, particularly the Balkans were ruled by Political Islam. Over the last 1400 years at least 270 million Kafirs (non- Muslims) were killed by jihad.